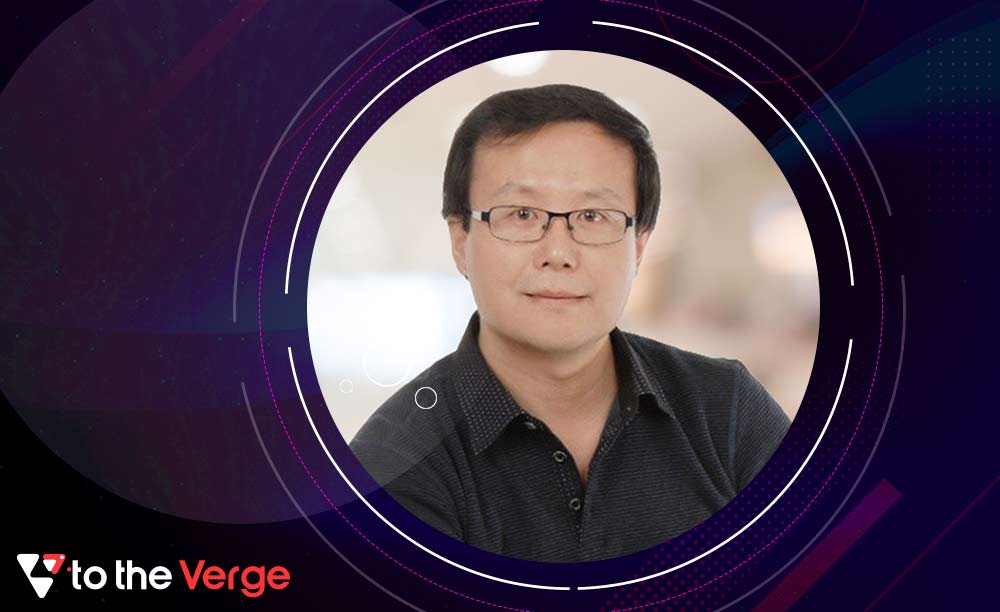 Henry Wang (Founder and CEO of SmartMesh) shares his insights on universal connectivity through the breakout of the internet boundary. He also shared about MeshBox, a central node that provides efficient routes and focuses on the role of the Internet of Things (IoT) and Artificial Intelligence (AI).

“To the Verge” had an enlightening conversation with Henry Wang, CEO and Founder of SmartMesh. He shared his views on how SmartMesh will lead us to internet-free digital payments and transactions. He also talked about digital offline payments in cryptocurrencies.

Table of Contents show
1 About SmartMesh
1.1 SmartMesh, A Differentiator In Terms Of Privacy and Security
1.2 About MeshBox:
1.3 —MeshBox As a CPU:
1.4 History Of The Internet
1.5 Conclusion

Henry shared, “SmartMesh is the InterPlanetary Decentralized Autonomous Mesh Network with hardware protocol MeshBox. The foundation promotes the next-generation application ecosystems based on Tokenship decentralized social networks. It allows blockchain to break through the Internet boundary into the IoT (Internet of Things) and IoE (Internet of Everything) era where all things are connected.”

According to him, it is estimated that, while the current state of Blockchain is ‘Blockchain over Internet,’ SmartMesh is focusing on the ‘Internet over Blockchain.’ As a result, SmartMesh allows peer-to-peer mobile connections without the Internet and offline cryptocurrency payments.

He stated, “SmartMesh Foundation is developing the SmartMesh app and protocol which allow smart devices running on iOS or Android systems to connect directly in P2P connections or through one another in P2P2P+ connections thereby forming Mesh Networks that do not require ISP or Telecom service.”

“The SmartMesh Foundation will collaborate with third-party development teams through incubation, collaboration, and other ways to expand and improve the SmartMesh ecosystem by including the functionality and features of the future of social and IoT networks.”

According to Henry, other networks have a carrier build network from a top-down approach with centralized building functionality. SmartMesh is a blockchain-based platform/network with a bottom-down approach, built in a distributed way. The network is not created by carriers but by the people using it.

The foundation’s primary focus is to bring agile, robustly featured Mesh Networks to every corner of the globe and beyond, bring greater security and privacy, network access to areas with little or no infrastructure, and the ability to communicate, transfer data, and make secure digital offline payments in cryptocurrencies.

He elaborated that users themselves can buy MeshBox, a next-generation blockchain hardware foundation of IT Infrastructure HyperMesh, and the gateway between the physical/digital world.

MeshBox is the physical/digital world gateway and the Blockchain hardware underpinning the next generation of HyperMesh IT Infrastructure. The cornerstone of Web3.0 is a decentralized network, distributed processing, and distributed storage. With the DAO in Proof of Mesh, the Singapore MeshBox team will deploy MeshBoxes worldwide by integrating NFT and DeFi, realizing the potential of the ‘Internet of Everything’ in emerging regions. 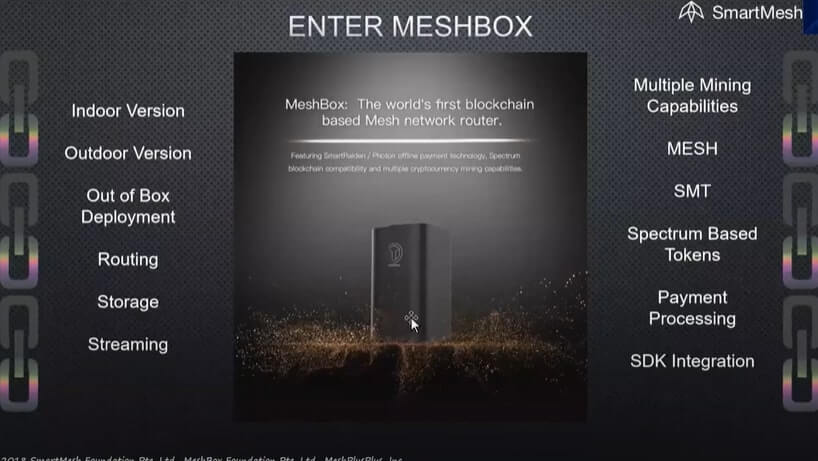 Henry stated, “We will be debuting in India soon with all of our services. We will make every effort to make this available to as many individuals as possible, including those in rural locations. In addition, people do not have to wait for carriers because carriers exclusively serve metropolitan areas.”

The availability of blockchain technology, he believes, would empower individuals. They don’t require a centralized building system; they can help themselves. He says, “That’s what SmartMesh is doing. People are connected in a decentralized manner. We value the internet, and as a result, Web 3 appears to be a big trend in the future.”

—MeshBox As a CPU:

Henry says, “The MeshBox is like a low-end computer or your home router, a home router with storage. But the configuration is slightly higher than your home router because it needs the blockchain node. It enables you to work offline.”

Henry Wang, in between the conversation, introduced us to one of his colleagues, Michael, a part of the Metalife team. He also shared his knowledge with us. The conversation with him was very insightful.

MeshBox, according to Michael, is a router that works with fiber and conventional cellular networks and satellite networks to offer connectivity in remote regions. It is agnostic to network action. Meshbox is unique because it can quickly connect to underdeveloped locations.

He shares, “There is a battery backup on the package. As a result, it may function for days without an electrical connection, which was another barrier for telecoms to overcome when launching their services. It’s a cost-effective solution. A single box can serve up to 500 people. You also have interconnection within the box when you have a mesh of distinct containers. As a result, you can create a virtual private network.”

“The actual brilliance of the product is that the photon network is superimposed, allowing digital tokenization to exchange value. So, if you’re mugged and attempting to sell, it enables you to deal globally right away. In addition, it gives power to local communities.”

According to him, there’s a capacity for IoT overlay in the device. It connects you to the rest of the world through communication, allows you to do eCommerce transactions and links devices to boost the building’s capabilities.

Michael informs, “Henry and his team have developed another technology layer. It’s called Bluetooth Low Energy Wormhole Protocol. It allows you to connect your iPhone to an Android phone without relying on the internet or the network.”

Michael used the example of Mars. He says, “Imagine you’ve built up an operation on Mars with a plethora of sensors; now you have to securely send all of the data, including IoT data, back to Earth. There can be a 20-minute delay between communications on Mars and the UK if done right. So with SmartMesh and Metalife, we’re delivering a unique distributed network that underpins it.”

—SmartMesh and Metalife – A Game Changer in Terms Of Enterprise:

Henry highlighted Elon Musk’s effort to trade Bitcoin onto Mars. He says, “Elon Musk failed to do because of the long distance between the earth and the mars. But with SmartMesh, we can bring any coins via our mesh network and onto Mars.”

Metalife connects people with a peer-to-peer approach, even if they don’t have access to the internet. It uses the Bluetooth Wormhole Protocol to connect to a local area network. So, even if there is no internet in a village, the entire community may be linked using Metalife. This decentralized social network is exposed to everyone. One can transfer their data and decentralized social graph wherever they go. 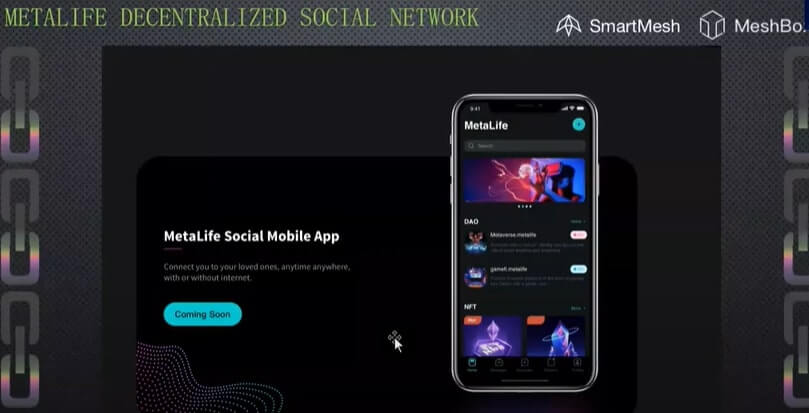 Henry states. “Metalife is likely to be the first comprehensive web 3 application that does not rely on a central server. Instead, you have to register on your micro machine if you download this software. And if you don’t have access to the internet, you can still communicate with individuals in your immediate vicinity. In addition, Metalife is supported by a fully decentralized infrastructure.” 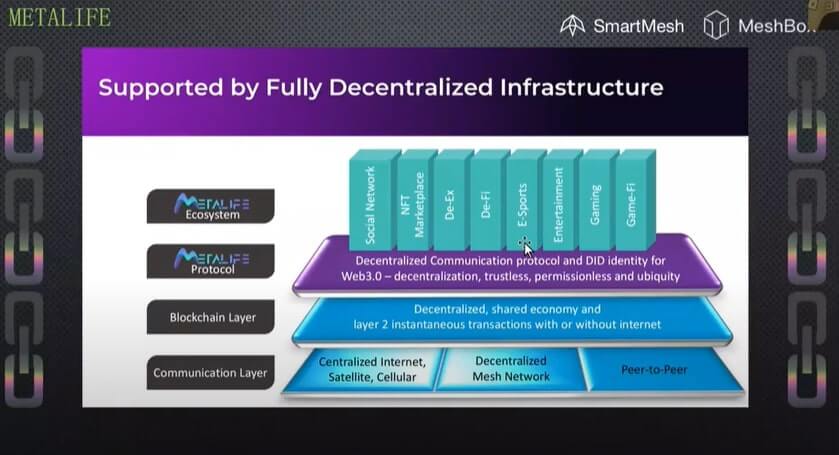 NFT+DeFi In MeshBox To Value Internet

SmartMesh employs the DeFi model and NFT to allow money from wealthier nations to move to developing countries, assisting in creating a network. Henry shared the advantages of NFT+DeFi:

History Of The Internet 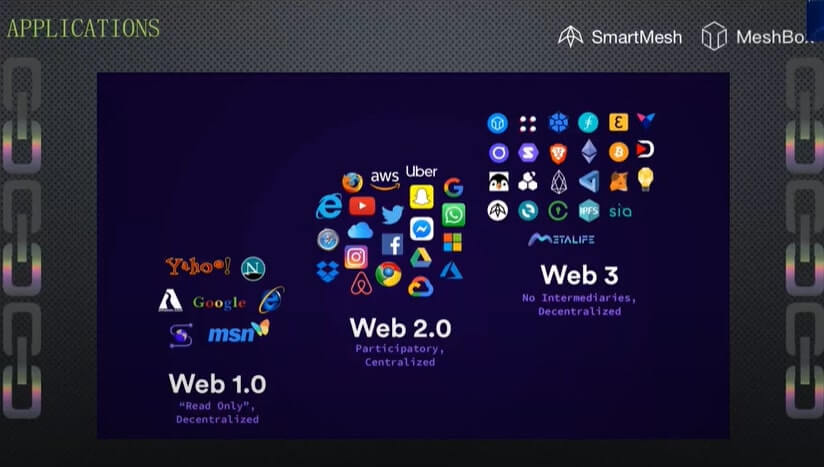 He described the diversity of projects that were and are to be introduced in this ecosystem. These projects, in a way, enhanced Web 3.0. He shared:

Henry’s Take On Potentials Of Metaverse

The metaverse, according to Henry, is the next generation of the internet. It enables producers to provide activity-based network immersive experiences. It also serves as a location for actions involving immersive embedded material. 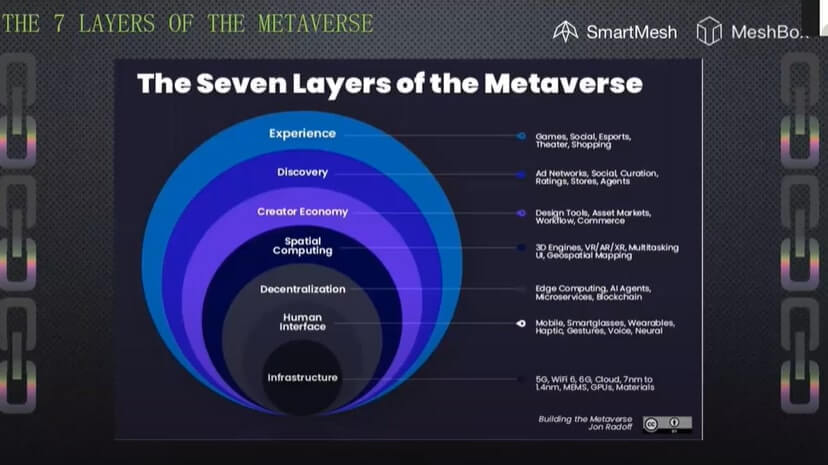 Future Potentials Of IoT as a Technology

IoT, the Internet Of Things, is a narrow band connection embedded with sensors and software.

Henry shares. “The sensors of IoT provide real-time data and feedback into the Metaverse. This proves the importance of IoT. But the technology should be based on Blockchain with proper authentication. In addition, the servers must be decentralized. MeshBox helps to create this. It serves as a conduit between the physical and digital worlds.”

His Views On Artificial Intelligence (AI) and Its Role In MeshBox

Henry says, “We should not allow the existence of powerful and centralized Artificial Intelligence on Earth. The allowance would be highly hazardous because, once they have an agreement, they will establish their languages, strategies, and development methods, which humans will not be able to comprehend. As a result, artificial intelligence must be deployed at the edge to prevent exploitation in a centralized one-point-of-failure system.”

“MeshBox uses artificial intelligence for privacy computing, which protects one’s data while still allowing it to be used for improved service. The protocol has been deployed with AI to provide users with decent services without jeopardizing their privacy.”

But, he claims that only blockchain technology will act as a shield to protect humankind.

Henry explained, “The reason behind this disconnection of remote areas is that people do not intend to help or promote remote regions as the internet is more centralized. This issue increases the need for blockchain technology, which will somehow resolve the challenge of digital connectivity.” 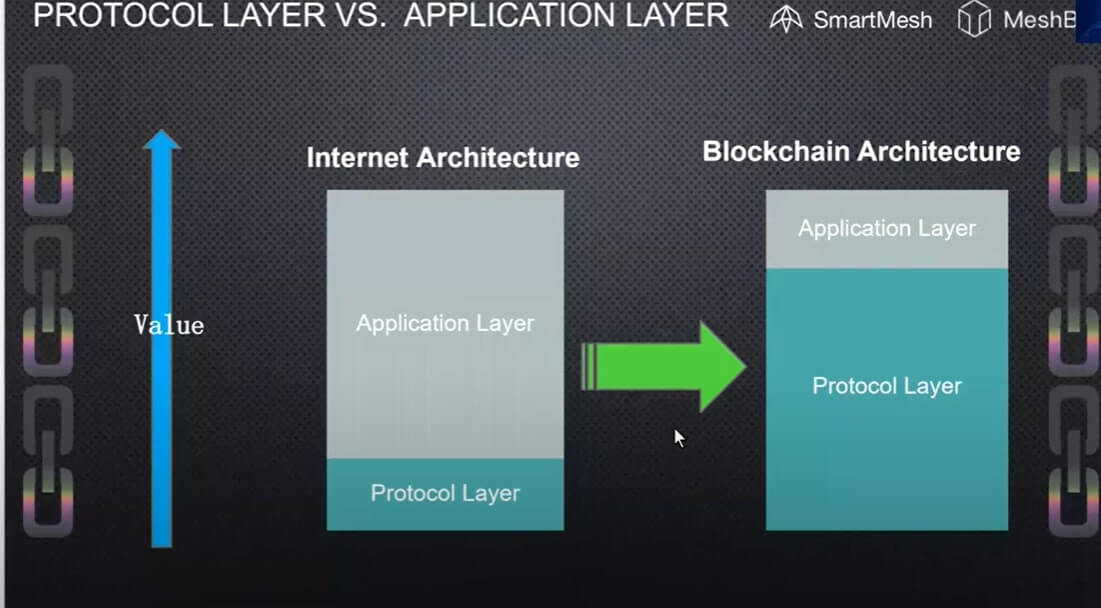 In Henry’s opinion, Blockchain technology will provide new capabilities with decentralized applications. The internet will incorporate money as a standard function, and the users will have more control over their digital identities and data due to the developments.

Henry introduced circuit switching, packet switching, and token switching, which served as a juncture for the new internet world. People will now be able to connect and earn mining rewards through the spectrums. MeshBox, in conjunction with satellite, will link all of Asia’s low-lying countries. “We’ll soon be opening services in India,” Henry says.

Our conversation with Henry Wang, Founder and CEO of SmartMesh, expanded our understanding of attaining Universal Connectivity without the need for the internet. He offered his thoughts on how Blockchain technology and low-earth AI satellites can keep people linked. He also enlightened us about token switching, focusing on futuristic possibilities of the Metaverse and the role of Artificial Intelligence (AI).

Henry Wang, Founder and CEO of SmartMesh visions for Universal Connectivity and Consensus from Maniverse to Metaverse. He defined Web3.0 One World One Web back in 2003 while working and studying at Washington University in St. Louis, where the Internet Founding Father Licklider graduated. He defined Token Switching as the switching mode for Value Internet, the foundation for Web3.0 and Metaverse.

Madeium, a Community-Driven Ecosystem By and For Creatives: Conversation with Jesse Rademacher

“To the Verge'' had an enlightening chat with Jesse Rademacher, Co-founder of Madeium, the first Design DAO (Decentralized Autonomous Organization). Our conversation touched on the evolving