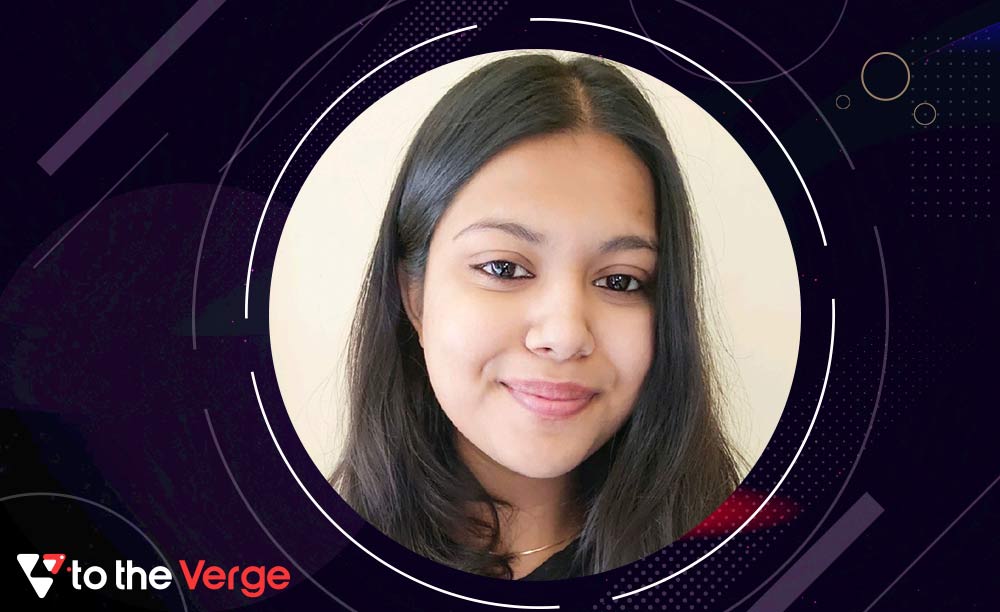 “To the Verge” had an illuminating conversation with Shrishti Singh, Co-founder of Blokminers and UnicusOne, a Multichain NFT ecosystem building transformational Web3 features. She gave her insights on the digital convergence of immersive technologies and how it benefits both the technical and economic sectors. She also envisages the significance of metaverse and NFTs.

Table of Contents show
1 About UnicusOne
1.1 Blockchain As a Stimulator For Web 3
1.2 Her Views On Multi-chain WaaS
1.3 360 Degree ‘Mild Code’ Solution – Intersection Of Gaming, Metaverse, NFTs In One Place
1.4 Shrishti’s Take On Web 3 Revolution & Its Potentials For Enterprise Sector
1.5 Potentials Of Web 3 For the Economic Sector
1.6 Her Take On NFT Plagiarism & Its Solutions
1.7 Shrishti’s Opinion On Metaverse
1.8 Her Views On Tech Literacy In India
1.9 Future Of Digital Convergence
1.10 Conclusion

UnicusOne is a multichain NFT ecosystem that aims to improve real-world and metaverse assets tokenization by implementing revolutionary Web3 capabilities. The organization is a Multi-chain WaaS (Web3 as a Service) platform for Metaverse, Gaming, and the NFT Economy.

Shrishti shares, “The organization offers web 3 as a service and caters as the bridge between web 2 developers and the people who want to step into web 3 but could not due to technical constraints.”

Blockchain As a Stimulator For Web 3

Blockchain, according to Shrishti, is a transparent environment in which everyone understands what is happening around them since there is no opacity. Web 3, on the other hand, is a curation of the World Wide Web that is decentralized, trustworthy, and respects the right to privacy of Humans.

“I wrote something about Web 3 and how technological security issues are being viewed with transparency, and the system was hacked the next day,” she says. According to her, under a system that promotes transparency and security, the current decentralized structure supports the fact that it is not safe. We’ll have to keep working on it. “If we look at blockchain as a whole, it’s undoubtedly facilitating the advent of Web 3,” she adds.

Her Views On Multi-chain WaaS

She explains that Multi-chain WaaS is when an organization provides Web 3 as a Service. According to her, we are on a specific chain now, with various open-source platforms like Etherium, Binance or Polygon, but the organization is currently targeting Silica, Solana, Phantom etc.

UnicusOne transforms a Web 2 site into a Web 3 site within 10-15 minutes and fulfills clients’ requirements. Shrishti shares how the organization work towards this.

“We have built a package or a mild coat STK which has to be installed in the code of the web 2 site and add a few lines of the quote to it, and then they could transform into a web 3 site that caters to the need of minting an NFT, can be put up for sale, could act as a crypto payment gateway.”

She shares, “Talking about this domain as a whole; we have a gaming platform, we have seen metaverse is the current boom and the buzz in the market. On the broader aspect, the 2,3 things that are very prominent in the metaverse are NFTs and cryptocurrencies.”

“Getting into NFT is a lucrative opportunity for everyone, from someone who has been in web 2 and now wants to get into web 3, they could find an escape through NFT. We understand the pain point that NFT sounds so exciting to someone that they do not know about it. So we provide them a bridge to get away with all the necessary information they need this is what our 360 Degree ‘Mild Code’ solution is.”

Shrishti discusses the metaverse’s spontaneous boom, which has left us all scratching our heads. “I read somewhere that most people believe a metaverse is a virtual world, but it is a movement in time where artificial intelligence is higher than human intellect, and it has existed,” she explains. “This isn’t the first time we’ve imagined an ecosystem based on augmented and virtual reality.”

According to her, the solitary reason for this unanticipated boom is Web 3. She highlights the notion by saying, “Web 3 respects privacy. Also, people in the metaverse may monetize their privacy, and developers and ordinary users are looking at this as a way to create a new sustainable economic structure. Metaverse has opened doors to profitable technical and commercial prospects, and web 3 adaptations worldwide are showing the technology a path.”

She deliberately explains that people are still skeptical about Web 3. They think it will fade away in due course of time. “It’s just that not everyone is adaptable to change, and we can’t expect everyone to accept it. So we overvalue the past and undervalue the feature. This is why individuals are unable to take advantage of chances. Web 3 isn’t causing problems; it’s just opening opportunities.”

“We used to trade on the stock market, which was relatively restricted and dominated by a few significant participants in the game. However, Web 3 is decentralized, allowing users to trade anytime. As a result, the growth of Web 3 is unquestionably beneficial to the business sector.”

Potentials Of Web 3 For the Economic Sector

She believes that to improve the economic sector, one should cease boasting about Web 3’s increased technological potential to improve the economy. For Web 3 developers, the brand and supply differences are extensive. But, on the other hand, we cannot overlook the technical side.

“Work that takes an hour that a web 2 developer would charge, web 3 developers would charge 5,6 times more, and clients will be unable to stop paying them,” she explains. “When it comes to cryptos and NFTs, they are now a trading asset, and even the most basic understanding of how they function can help you get the most out of them. For the economic sector, this possibility has opened doors.”

For traders and investors, Web 3 offers limitless possibilities. Shrishti believes it has the potential to alter the economic landscape.

Her Take On NFT Plagiarism & Its Solutions

According to her, an NFT is any file that may be downloaded at any time and from any location. She discussed the Bored Ape NFT, one of the market’s most popular produced art pieces. They have a unique contract address, she reveals. “Even if I construct my contract address, a URI, and mint that NFT, the legitimacy will be questioned since bored ape’s contract address is not the same as the one I minted it. Several steps have been taken to resolve the issue. This, however, is not sustainable since we cannot prevent individuals from doing so.”

According to her, sharing awareness among people regarding authenticity will somehow resolve the issue. “We need to educate people because they are just stepping into it. They must know that they must verify the contract address before buying the NFT.”

She also highlighted a few of the technologies like IPFS and Pinata. For example, it returns as a unique hash whenever we upload a file. So, an AIML model that already exists could detect whether this particular image exists on their platform or not. If it does, they could not allow a different one to be added.

Before entering into technological issues, Shrishti feels that one should have a fundamental understanding of what they are doing with their hands. People should be taught how to trade NFTs, how Web 3 works, what a smart contract is, who owns it, etc. “You should know how resistance works if you’re getting into NFts. So, the essentials must be cleared.”

According to her, Metaverse is the point in time where artificial intelligence is greater than human intelligence. But, she shares, “We can not deny that the pandemic has made us realize how important human presence is around us. Metaverse again understood that pain point and catered to that need. People can now connect to their daily friends living anywhere globally.”

She believes that the Metaverse exists in the real world. It could not supersede the real world. It is a technical and economic opportunity for developers to get into AR, VR and blockchain. She says, “We can not say that we have developed enough because every day, new technologies emerge. If something new has come up in the market, there are limitless opportunities to improve it.”

The metaverse creates a demand and supply chain where individuals buy land and properties. According to her, it’s a financial opportunity. Therefore, we should not compare it to the real world and look at its perks and benefits.

She says, “We can not expect metaverse to give us that touch and feel factor. It does not matter how intelligent machine learning becomes. It would never trespass the human value. So we should get the first mover’s advantage from metaverse instead of criticizing it.”

Her Views On Tech Literacy In India

According to her, the adaptability rate in India is not as low as we think. For example, she says, “I yesterday only read on LinkedIn that India has the most number of blockchain and web 3 developers after the US. But Indians are stereotyped as conservative and not prone to changes.”

She wishes to spread awareness that Web 3 is the future, and we should never hinder the first mover’s advantage. So, according to her, someone who wishes to be a part of the technical aspect must have basic knowledge. “ Because we usually ignore the basics and hop on to coding it and understanding complex aspects. One should know what blockchain is, what connects it, and what are minors.”

“According to me, LinkedIn is the best place to connect to people, so one should reach out for support. This should be a clear roadmap because the web 3 community is very welcoming and helpful.”

According to her, Web 3 and decentralization are the future. So we will have a Web 3 identity in time, and everything will be decentralized.

“For me talking specifically, I got into blockchain long back. I was very skeptical about getting into blockchain because people are not very open about these technologies. But now I am very satisfied and convinced I would stay in this domain and never step back from it.”

Shrishti Singh, Co-Founder of UnicusOne, a multichain NFT ecosystem, provided us with enlightening insights about Web 3’s possibilities. She adamantly proclaims that web 3 is the future. Web 3 unlocks not only technological advancements but also economic advantages. Besides, immersive technologies also help environments with tier factors in several ways. However, having basic information before diving into is the advice Shristi extends to the novice techies diving into the space.

Shrishti Singh is the Co-founder of Blokminer, a Blockchain Service Company and UnicusOne, a Multichain NFT ecosystem building transformational Web3 features. She is a Web3.0 Tech Founder. A passionate promoter of Blockchain Technology, with extensive knowledge of Cryptocurrencies, DAO, Metaverse, and NFTs. She has worked as a blockchain developer with organizations such as Rapid Innovation.