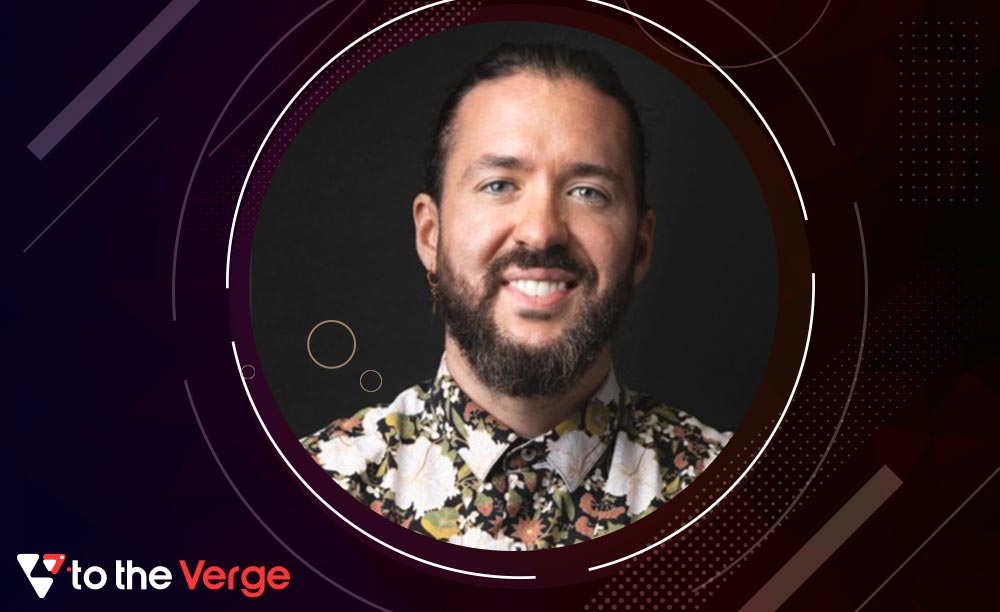 “To the Verge” had an edifying conversation with Jim Welch, Creative Director at Devhouse Agency, an independent software development studio specializing in developing Augmented Reality (AR), Virtual Reality (VR), and Video Games. He discusses the role of AR and VR in today’s spectrum with its benefits. He also talks about the role of metaverse in the future of gaming along with his vision for NFTs.

He says, “We create fascinating, interactive experiences for the next web iteration, bringing the metaverse’s future to life. Our enthusiasm for creativity shines through in our work. We constantly offer next-generation experiences to the metaverse, whether it’s modeling hyper-realistic digital twins, making compelling mobile AR applications, or creating immersive VR games.”

“Our engineers, artists, and producers are dedicated to creating AR, VR, and gaming experiences that delight clients and inspire customers. We promise high-quality cooperation, top-notch execution, and rock-solid reliability as a small firm so that you can trust the outcomes of every project.”

The company aspires to be a creative force in new interactive mediums by bringing a pioneering attitude and feeling of joy to work. The team comprises artists, developers, producers, and project managers who are smart, creative, and kind and will assist in bringing the concept to life.

Jim elaborates his vision of Augmented Reality (AR) as a technology that combines the real-world environment with digital goods by layering innovative 3D models and graphics into a user’s surroundings and Virtual Reality (VR) as a portal to another realm.

He says, “Virtual Reality is a technology that replaces what we see with digital visuals and renderings, making simulations more realistic, accurate, and engaging than ever before. It transports people into a 3D, 360° virtual landscape where they can be present and absorbed in the experience they’ve created, removing them from their surroundings.”

Unlike virtual reality, which removes a user from their existence, he claims that AR allows them to embrace both simultaneously, inviting them into real-world situations enhanced with artificially generated graphics to heighten senses and break down barriers between what we know is possible and what we dare to dream is possible.

Jim explains how the company uses Augmented Reality and Virtual Reality. He explains that the DevHouse Agency is an Augmented Reality company that offers services that enable customers to push physical boundaries by combining them with digital elements.

“Your VR experiences may be experienced across many platforms with the correct development methods from The Dev House Agency’s VR Studio, assisting you in creating and distributing your content as needed.”

Character modeling, according to Jim, is a subset of 3D modeling. People create 3D models and characters, but they also sculpt them at times, which is generally a feature of 3D modeling.

He shares that individuals practically know how to sculpt if they’re 3D modelers. Hard-surface 3D modeling, architecture, and furnishings would be their specialties. On the other hand, if an individual specializes in character modeling, they tend to sculpt and often have it as an overlap talent, so everyone who begins to train them tends to learn all of them and then pick the one they want.

“A subset of 3D modeling is character modeling. You create 3D models and characters, but you also sculpt them occasionally. You practically know how to sculpt if you’re a 3D modeler. Hard-surface modeling, architecture, and furnishings are your specialties. If you specialize in characters, you prefer to sculpt, and you usually have overlap abilities, so anybody who begins to train them is likely to learn all of them and then choose and select which one they want.”

He establishes the importance of 3D modeling. He says, “We create many characters for our video games, projects, and clients. What’s intriguing is that you have a lot of aesthetic options. For example, you may go for an extremely realistic or cartoony look. The tool is affected by the decisions you make. As a result, it impacts your 3D modeling choices.”

Jim envisages the potential of 3D modeling. According to him, without 3D modeling, one can not purchase online assets as then there may be a shortage of Photogrammetry. Photogrammetry is capturing space and rendering that space into a 3D model. As a result, 3D Models are required to obtain any virtual experience that is not limited to a 360-degree sphere.

“You can’t buy assets online without 3D modeling. There is no other technique to get things into the virtual experience outside photogrammetry. Photogrammetry is the process of collecting space and rendering it as a three-dimensional representation. To obtain any virtual experience that is not limited to a 360-degree sphere, anything beyond that necessitates the use of 3D models.”

Throughout his journey, Jim described several hurdles. “Years of discovering barriers and avoiding the tricks stone to conquer many problems,” he explains. “I used to take these issues for granted since they appear simple when we kept addressing them.”

He discussed one of the current issues in the VR sector. Locomotion is one of the key issues, according to him, where people struggle to grasp how to make their characters move. Do they physically move or what? And the most reflected tribulation is how do they comprehend their character?

“As a contemporary problem, there are obstacles to locomotion that everyone is still striving to solve. An issue has arisen in the manufacturing flow. You know how to create a 3D world in a video game, but you’re stumped on how to adapt it to a VR headset. How do you know it’s running on the appropriate framework? Ensuring that it does not make people feel nauseous is still a major difficulty everyone is working on.”

Role Of Gaming In Creating Metaverse

Jim envisages the importance of gaming in creating metaverse as a huge contribution to the space. According to him, it’s like an entry point for individuals to enter from the real world into the virtual space. He says, “These days, gamers are already participating in online games with their digital personae,” he explains. So they have created a community in the place that is already familiar with the notion.”

He contends that Gamification is how things have become more virtual, and people are more willing to interact with something more fun and engaging. As a result, the Devhouse Agency creates venues for individuals to connect and participate in safety training programs. These initiatives make the place more enjoyable similar to what games do. As a result, more individuals are using the platform.

He thinks the NFT boom is an intriguing notion since it’s often tangled up with the metaverse. According to him, it works when there is a connection, but not always. “Utilities are crucial with NFTs since they function for NFTs,” he says. NFTs were formerly all about art and creativity, but now the focus has switched to utility, so if I buy one now, it must be able to help me in the real world or provide me with access to anything.

He also enlightened us with the contribution of Devhouse Agency towards the NFT Boom. The Agency has built around 4 NFTs so that people can have NFT access to a game. The company also has developers on staff that help it design smart contracts.

His Vision For Creating Metaverse

According to him, we all work through the same interoperable system or universe. Whatever we are building or creating exists in the same ecosystem. He says, “I hope it stays the same because, through metaverse, we are creating avatars. We can communicate and argue on a platform and play video games.”

He contends that the metaverse gives a solitary experience and that we require that level of interoperability. “We need to be able to navigate between different realms, and I envision that occurring through data conversion technologies. As a result, these items are missing parts that will help tie the room together,” he explains.

I’d like to start a service firm and work with clients in the area. But, by bringing playfulness into the metaverse, I’d love to be able to get our own creative experience into the area.

Jim Welch’s conversation gave us insights into how Devhouse Agency turns visions into reality using Augmented Reality (AR) and Virtual Reality (VR) to enhance the metaverse. The organization wishes to create a gamified universe that may allow people to relish metaverse more distinctively than before.

Jim Welch is the Creative Director of Devhouse Agency, A software development studio that concentrates on Metaverse technologies such as AR/VR and gaming. He is a designer, creator, and “product person.” He enjoys creating, whether it’s through coding, founding a company, or composing an orchestral composition.

He began his work as a composer and sound designer for FUNimation Entertainment, where Jim created original music and sound effects for Dragon Ball Z and Full Metal Alchemist. After his first interaction with software development, he got fascinated when transitioning from FUNimation to video game audio. He moved on to build a gamified video chat platform as the chief software engineer.

He also worked as a Unity programmer for fast-paced creative firms like Groove Jones, a lead developer for software companies like Sector 5 Digital, and a VR Subject Matter Expert (SME) for huge organizations like ExxonMobil throughout his career.