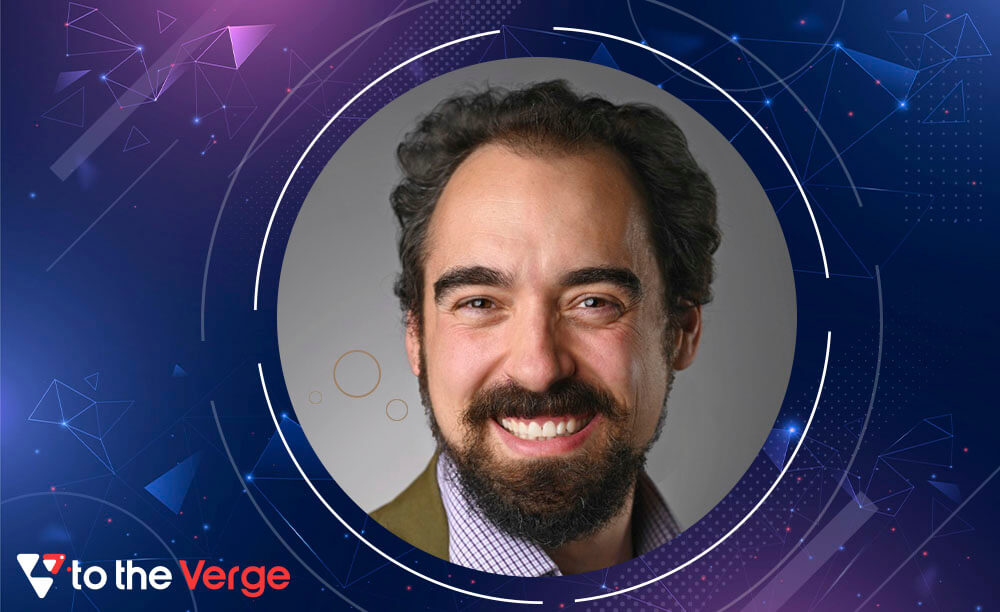 Crafting XR-chitecture And The Spectacles Within – Insights By Alex Coulombe

Alex Coulombe, CEO of Heavenue, shares his experience and insights relating to immersive technologies. He discussed connecting performers to audiences across the Metaverse.

To The Verge had an enlightening conversation with Alex Coulombe – CEO of Heavenue. The entrepreneur is passionate about exploring emerging technology, especially virtual reality for creative visions. He shares his thoughts on taking the world closer to the Metaverse. Read till the end to learn all about his creative views.

Table of Contents show
1 What is “Heavenue” all about and what’s Alex’s role in it?
1.1 What does “XR-chitect” mean?
1.2 How are you working to replicate the real world into the virtual world?
1.3 Alex on how virtual reality also helps augmented reality:
1.4 Alex’s idea of applying immersive technologies to entertainment.
1.5 How is CloudXR being used for theatre shows?
1.6 How is XR taking the world closer to the Metaverse?

What is “Heavenue” all about and what’s Alex’s role in it?

Alex shared that Heavenue is a new platform that connects performers with audiences worldwide. Their vision is to make entertainment accessible without compromising the experience. For this, Heavenue is developing scalable methods for performers to launch live, high-fidelity, immersive shows and deliver them to VR headsets in real-time.

Talking about his background, he shared, “I come from a background of architecture and theatre. So I have always been interested in using emerging technologies to help forward creative visions.”

He started utilizing these immersive technologies very early in his theatre group in college. Over the years, his work grew into designing actual shows in actual theatres using virtual reality and augmented reality. With Heavenue, Alex is now helping to create custom, fully virtual experiences that usually have a theatrical element in them.

Alex added that “In Heavenue, we design a custom platform that gives performers a lot more control over live shows, such as how they proceed, what the audience experience will be like, especially using the tools with Unreal Engine. So we started to work on developing these tools to make it easy for anyone who wants to perform virtually in a really compelling way.”

“’A Christmas Carol’ was our very first show, and everyone who joined was in a ‘Meta Quest’ headset. This high fidelity experience was streamed to users from the cloud and allowed for an interactive show in VR that went far beyond anything our audience members had seen before. Since then, we are building many more tools, especially for making experiences more accessible to those who don’t have VR headsets so that anyone who wants to see these shows can interact from a browser.”

Alex shared, “The XR-chitect is very much to imply that I have gone from designing real buildings in the world, to virtual buildings and experiences that live in augmented reality and virtual reality.”

How are you working to replicate the real world into the virtual world?

Alex believes that “You don’t have to replicate the real world necessarily. There are many affordances in virtual reality worth taking advantage of. It’s a balance because, on the one hand, there is a term called skeuomorphism, which is about trying to replicate things that people are familiar with. On the other hand, it’s an excellent tool for virtual reality and augmented reality because it gives people a stepping stone or behavior they are already comfortable with. Theatre is a perfect example of this.”

Alex shared, “As an architect and theatremaker, I always had the ambition to convey my creative ideas as clearly as possible. However, I always felt limited by the tools at my disposal. It felt like to properly showcase my vision, there would be insurmountable obstacles in regards to expense, time, resources, and manpower because it takes a lot of people and effort to do things in the real world.”

He first experienced virtual reality when he was eight years old; it was around 1995. He shared, “It felt like the most amazing thing I had ever seen. Pretty much since then, I have been thinking about this technology and how it could be helpful in the real world. In architecture, for example, what is it like to move from one space to another? What will it be like to move from a tight and compact space into a large and open space or dark to bright space? Feeling like you’re there in that virtual space during those shifts in perception is singular to VR”

He added that these immersive technologies had been around for a long time, as far back as the 1800s to some extent. But what’s new is accessibility. For less than the price of a Playstation, anyone can buy a standalone VR headset. Anyone who has a smartphone or tablet can experience augmented reality. Frontline development is still needed to determine what works and what doesn’t. The Heavenue team loves wrestling with new, exciting, and challenging ideas without clear answers.

“With Heavenue, we are creating tools that make the experience more accessible. Now anyone with a web browser can pop right into a live show. They do not need to be in VR; they can use their phone, Chromebook, or even a very low-end computer. All they need is a stable internet connection. We’re also trying to harness cloud computers so that you do not need to worry about the local hardware.”

How is CloudXR being used for theatre shows?

Alex shared, “CloudXR is what we currently use for VR, allowing each headset to connect to a companion virtual machine with a top-of-the-line GPU. Our infrastructure enables you to scale to the point of allowing thousands of people to attend a show at a time. All you have to do is open an app in your headset, and you’re immediately dropped into Heavenue’s virtual venue running on the cloud.”

“It is also pretty simple to get out of the virtual environment. For example, suppose you suddenly receive an important phone call. You can take off your headset, and the show will keep going in the background, but as soon as you put the headset back on, you will still be in the live experience. If you were running something locally and take off your headset mid-experience, it might crash or go to sleep and you’d have to restart the whole experience again.”

How is XR taking the world closer to the Metaverse?

Alex winces, “Metaverse is a very loaded term, particularly when people debate what defines a true Metaverse. For me when I think about an ultimate Metaverse, there are two sides to it: a VR side and an AR side to it.”

“The VR side is all about presence in a totally new place. It has a level of connection that any non-VR experience cannot offer. Eye contact! There are people in the Metaverse who only know each other in the virtual world, and some are there who actually haven’t met in real life but know each other in the virtual space. Some don’t even know how they look in real life because they have met each other through their avatars. That’s a fascinating level of control over self-image and privacy. That freedom of self-expression is the key to the Metaverse, combined with the fact that you actually feel like you are there with people.”

Alex believes the augmented reality side of Metaverse is equally as crucial as the virtual reality side. This Metaverse is not about escaping from the real world. On the contrary, it is essential to maintain a connection with the actual environment around us. In Alex’s view, it could be unhealthy if people escape the real world with virtual reality because they don’t want to deal with the physical world.

He continues: “There are certain things that you can only do in virtual reality, and there are plenty of other exciting things that you can only do in the real world. Some things are best experienced with no digital layer involved. But some experiences will be fascinating with an augmented reality layer on top of the world because it’s both useful and exciting when you go around the world with contextual data.”

Alex wants to reduce the technical friction of creating and experiencing virtual worlds as he strives to develop new tools and workflows. One of the offerings of Heavenue is to allow people to experience virtual space simply through an internet browser without needing a headset. This offers the audience an interactive experience where they can choose to be six inches away from a live world-class performer, or zoomed out one hundred feet away for a macro view of the spectacle.

The idea of the Metaverse may sound promising, which is why many of the world’s leading tech giants are investing heavily in its development. If it comes to realization, it is conceivable that it may transform enterprise operations and consumer behavior. Alex is continuously working to make virtual experiences more accessible to the users and connect performers to audiences across the Metaverse. If Heavenue continues on its current track, we may very well begin to see many more celebrations and events happening live in the Metaverse.

Alex Coulombe is a designer, developer, and educator. He’s an architect turned XR-chitect who has been creating theater (and theaters!) for over a decade. A consummate adopter of emerging tech, in 2013 he began utilizing virtual reality to help Fisher Dachs Associates design new venues around the world. This led to helping existing venues such as the NYC Park Avenue Armory previz their live shows, including Kenneth Branagh’s Macbeth (2014), and then spinning off a full XR creative studio, Agile Lens, in 2016. In 2018 he assembled a diverse coalition of theater artists and technicians to study the most effective means of developing live VR performances, spanning topics from genre selection to avatar stylization to methods for audience engagement and retention. The results of these studies led to collaborations on a number of pieces, including the Venice Film Festival’s very first live VR show viewable around the world, Loveseat, as well as the world’s only ongoing live VR theater festival, OnBoardXR, which premiered in its first iteration at HERE Fest in October 2020 and was included in SIGGRAPH 2021. Alex’s newest venture, Heavenue, is a platform designed to immerse audiences interactively in high-fidelity live performances across a variety of devices (including VR) using cutting-edge cloud computing. The first production was a new take on Christmas Carol in partnership with Actors Theatre of Louisville. It premiered in December 2021.