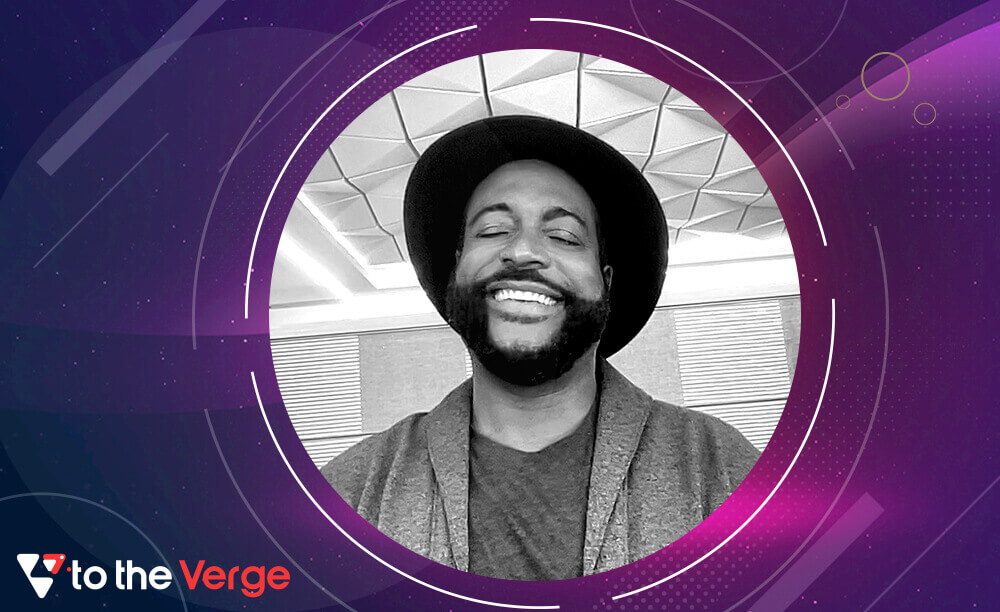 ‘To The Verge’ had an enlightening meeting with Dedric Reid on Spatial, an incredible immersive platform. We discussed their fun work, interesting projects, challenges, and vision for the future. Stay tuned till the end to know about the journey and his vision for the future!

Table of Contents show
1 About HelloVR and MetaWorld
1.1 What Differentiates The Platform?
1.2 Views on Present Use of VR and Advancement Areas
1.3 VR Uses-Cases, Utility, and Business Opportunities
1.3.1 Challenges Associated the Usage of VR
1.4 Vision for the Future
1.4.1 Conclusion

HelloVR is a social virtual reality studio that builds open-world virtual reality experiences. MetaWorld is one of the premium products created by the studio until the platform was made open to the public. Currently, other people have more ownership and stewardship over it, and Dedric is a passionate contributor to the platform.

“MetaWorld is a decentralized 10,000 square mile simulated reality powered by blockchain. It’s the first of its kind. It is a very big world. When we launched it in 2014, the press considered it the closest thing to an actual Matrix — that means everything in the world lives even when we aren’t there.”

The platform utilizes many different technologies and systems to create, what Dedric calls, a sovereign nation for those who want to be a part of it. For example, AR Cognitive Simulation (a nature simulation), simulated NFTs powered by AI, etc. MetaWorld was built using the Unity game engine, and Spatial is the platform used to showcase it.

Dedric explained to us how simulated NFTs worked. He expressed that the simulated digital assets are bought from the marketplace and then land in the person’s inventory, situated at their home in the MetaWorld. For instance, if someone purchased a stimulated drone as an NFT, then after wearing a VR headset, they can fly it around in the MetaWorld. The feeling of operating the drone is extremely realistic because of the virtual reality simulation.

What Differentiates The Platform?

Dedric shared some specific points that differentiate MetaWorld from all the other metaverses.

1) Fidelity and Photorealism. The details and accuracy of the platform are relatively more precise and realistic compared to other similar platforms. For this, they use

photogrammetry. They also take 360-degree images of the real world and stimulate them to create realism in digital objects and environments.

2) Persistence. Everything in the MetaWorld is persistent. Dedric explained that when one leaves the MetaWorld, everything in it continues to happen normally. For instance, if a rock were thrown and displaced, it would remain in its new position and not reset.

4) Community-Owned. Another special thing about the platform is that it is community-owned. MetaWorld is a Decentralised Autonomous Organization (DAO), incorporated as a Limited Liability Company (LLC). Essentially, it is owned by all of its members. Licensing agreements are owned by the people who are in the space.

Views on Present Use of VR and Advancement Areas

Dedric believes that VR technology has come a long way since its inception. Being an active member of the developer and designer community, he thinks several unique and wide-ranging use-cases have been introduced for this technology. Different entertainment forms like gaming and other utility areas like education, training, fitness, health, work, and more are present. VR as a technology is expanding its scope of applicability.

On the flip side, Dedric believes there is still a lot of scope for improvement in the technology. He wishes that the onboarding experience for VR becomes easier for people so that they can comfortably use the technology without navigational conversations. He further added that the cognitive load for the application or device would have to be reduced. Despite being familiar

with the platform’s functionality, a lack of steadiness is faced to some extent.

Dedric has been a VR developer since the early days of 2013. He plans to improve the VR experience and has made it a priority in MetaWorld and HelloVR.

VR is an area of technology that is full of possibilities. Dedric shared that anything that one imagines to do on Earth can be done in VR since it’s all about simulation. It’s a synthetic environment, and therefore, people can use it for several things without wasting resources. For instance, governments use the synthetic environment to do city planning.

MetaWorld also allows companies to buy land in the simulated VR world and then test their products before actual production. These are a few ways in which VR technology is used to bring the social components of the real world to simulation.

Dedric cited another example, “You could fly a fighter jet across this world. An actual jet Boeing can license and build their airport in this world, populate it with people and pay them to test their product. The use-cases and utility can go on and on.”

According to Dedric, the social simulation experiences bring utility to spatial computing in a new way. The ways for public and private collaborations have expanded. Now people can actively participate in building and developing the products they wish to consume.

The business opportunities in VR are huge, said Dedric. He shared MetaWorld is building venues in the space and partnering with artists to organize virtual concerts. Moreover, they are also working with architects who use the platform to dream up new forms of architecture.

“In VR, you are no longer bound by physics, although this world is very much physics-based. It is a massive, creative space where one has the freedom to do whatever they want. So, it’s very appealing to architects, and we have them lined up.”

He continued that some artists have been quite enthusiastic about creating galleries in MetaWorld where they can showcase their artwork NFTs and even sell them. The platform has also partnered with some people working with robotic dogs in the simulated space to develop dog products. Dedric said these and many more unique and innovative projects are underway. This is how VR provides people a chance to experiment with their ideas.

Challenges Associated the Usage of VR

Dedric stated there are two kinds of challenges that the technology is facing presently, particularly his platform – MetaWorld. These are technical and social/cultural challenges.

Regarding the technical challenges, he said, “The technology is still fairly new; it doesn’t work all the time. It gets extremely buggy. VR, spatial computing, and the metaverse — companies are all over the space; tons of stuff are out there. There’s a lot of excitement, but there’s a lot of fragmentation. Things aren’t fitting together.”

The social challenge herein is that people can’t clearly understand how these platforms function and their purpose/use. Dedric shared, “People often misinterpret what we’re doing. There’s a lot of criticism of the world we’re building, and we’re subject to corporate espionage, too, since our platform is different.”

He added, “We don’t collect people’s data and sell it. We believe individuals have the right to their data and can utilize it whichever way they like. The data we collect is therefore returned and secure with its owners.”

Dedric emphasized that the tech community hasn’t fully realized the fact that innovation can exist outside of Silicon Valley, beyond the standard people who develop games and software, etc.

“There are talented people all over the planet; they have powerful tools to work with, have created platforms, and are doing great innovations. People have not recognized it, but it’s amazing.”

Dedric believes in making MetaWorld an all-inclusive decentralized platform that will empower innovators, creators, people of color, women, and people from all communities to combat social challenges.

“The major challenge with us right now is social/cultural. The technological challenge can be worked with; it’s the fun part of problem-solving.”

He continued, “The more we scale, the more people get involved, and once there’s a convergence and more corporate partnerships, I think we’ll be able to overcome the social/cultural challenge with a hybrid model — both decentralized and centralized model. Because the fact of the matter is a 100% decentralization is not possible. There has to be some level of centralization, regulation, and some level of the corporate culture that could be used in the new space we’re creating.”

Vision for the Future

As the inventor of MetaWorld, Dedric envisions the platform to bring something positive into the world that people can enjoy. It will be a way to empower people and change their lives economically, rather than setting it as a path to profits for only a certain people.

“People say someday in the future we will create jobs in the metaverse. We have already done that. Today, people are working in MetaWorld with jobs, making money with crypto. And we targeted people who had very few resources, who were poor. The alternative, the standard centralized and old-school way, was that —

a) Be wealthy yourself

b) Have wealthy entities provide you with good wealth

d) And then everybody wealthy, get wealthy together.

What does this system do? It leaves everybody else out.”

He added, “You have to think differently about the metaverse and technology. We’re so used to the traditional model where you have a founder, a company, and then there are shareholders. And you have to do whatever’s necessary to make money. In the case of MetaWorld, we don’t have that problem. We’re not worried about that.

We just want to make people happy. We want to build a world around an individual and give importance to their ideas.”

His ultimate vision for the platform is to create an active, vast scale, stimulated reality owned by the people. The aim is to make people comfortable with the concepts of the metaverse and extend awareness regarding its role in education, entertainment, training, health, wellness, healing, and more. Dedric wants the platform to drive worthwhile experiences to people and offer them something they can own.

Metaverse is a pool of possibilities, and MetaWorld is one such platform wherein innovation and ideas are blooming. Dedric Reid shared with us how the platform was built and has been community-driven since its inception. In a world of advancing technology and profit chase, Dedric has prioritized user experience and inclusivity to deliver virtuous meaning and purpose to the utility of future technologies.

Dedric Reid is the Founder and CEO of HelloVR. He has been working in the VR technology industry since 2013. He has significantly partnered with leading companies such as Meta, formerly known as Facebook.