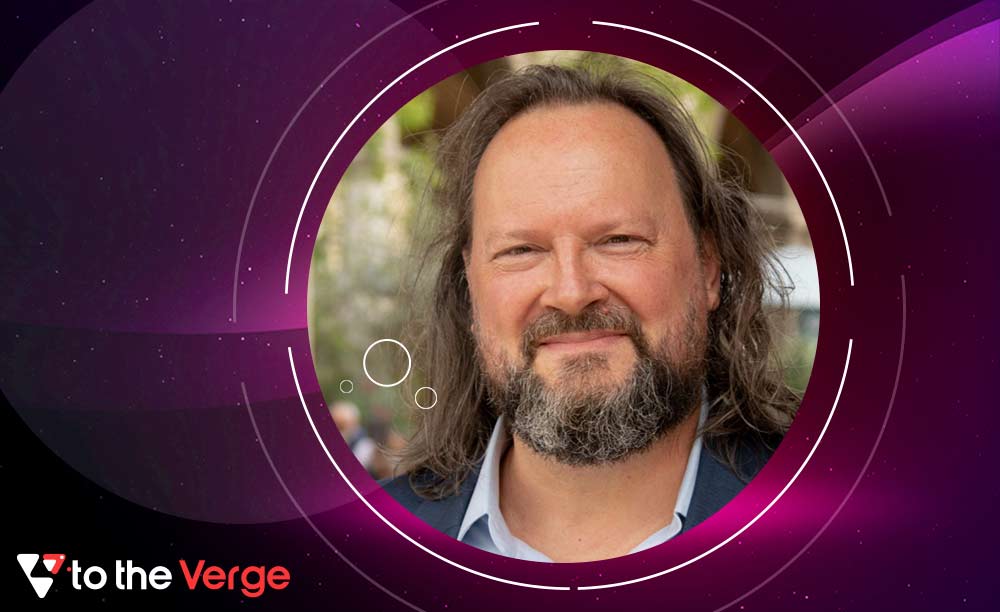 Decentralization, An Asset To The Global World – Thoughts by David Orban

David Orban (Managing Advisor of Beyond Enterprizes ) shares his views on various emerging technologies with a particular focus on Artificial Intelligence (AI) and futuristic possibilities of the metaverse. He also shared distinctive business strategies and offered opinions on decentralization.

“To the Verge” had an enlightening conversation with David Orban. He specialized in expediting technical transformation to meet the demands of higher-level organizations. In addition, he is well-versed in product marketing as well as globalization. Finally, he envisions himself and his ideas at the intersection of technology and society as they coevolve.

Beyond Enterprizes is an organization that offers strategic and technical leadership, advisory, and support capabilities to projects in blockchain implementation and development stages.

David shared, “Beyond Enterprizes, looks or projects at 360 degrees. We want to help our clients understand what’s possible today and what will be possible in two or five years as technology evolves”.

“We supported around 50 clients whose cumulative market cap expressed as the total value of their crypto tokens at $14 billion. So from zero to $14 billion, seen in four years”.

The organization is also engaged in analyzing, marketing, designing and implementing technology. David adds, “We always look at what value we can add to our clients and intervene.”

He says, “Beyond Enterprizes was conceived to achieve, execute, and overcome the limitations of traditional strategic advisory firms.”

David believes that it is very important to articulate the mission and the values. The target market should focus on delivering the solution to a specific challenge for the people in the market field. He says, “When strategy hits reality, it will always change. The faster you can measure the consequences of your decisions, the better you will be able to iterate and adapt so that your project’s objective is achieved rather than going for a long period on a theoretical level.”

He believes that working with clients who can quickly turn a strategy into tangible action and include market input is one of the most promising strategies.

David shares, “I concluded that we are going towards decentralization, across various independent industries, solar energy, 3d printing, digital manufacturing, cultivated meat and precision agriculture in food, and many other areas”.

In a complicated environment where believing a priori that you know what will work is virtually always erroneous, he contends that trying at the margins helps people to look for answers that work.

He says, “Due to the decentralization, Bitcoin came and wasn’t a surprise as it fulfilled what I expected in payments, finances, and the value layer of the internet. We may have a code snippet representing a picture, but the code snippet that defined payments was absent. That is something that many people should be concerned about”.

According to David, the internet evolved to become a tool for consumers and companies to communicate. But, even said, there are still a lot of firms that haven’t fully embraced internet-based solutions.

He says, “The blockchain may become the basis for representing value assets. It will significantly improve how businesses understand themselves and their interactions in a complex and adaptable environment”.

“Similarly, like social media. It broke through a well-maintained barrier. With the potential for a CEO to talk directly to consumers and vice versa, it was guarded by PR specialists and removed the boundary between within and outside an enterprise”.

According to him, Blockchain will eliminate the distinctions between the inside and outside of a single organization, with those who can take advantage of it creating extremely flexible arrangements, transparent and accountable transaction ecosystems, and significant new ways of starting, growing and maintaining businesses.

He deliberates, “But we are still in the discovery process.”

David’s Take On Evolving Cryptocurrency And Its Pros and Cons

According to David, a handful of individuals comprehend the complexities, medium, long-term interconnections and repercussions of how currencies might change. Yet, the expenditures for these trials are non-existent.

He elaborates, “You need a developer to replicate code repositories, a copywriter to write text, and a designer to make it all nice. That is why thousands of projects are launching out of nowhere; they serve surprising power and are being promoted and taken on by the market. But unfortunately, the number of projects that fail is proportionally high, too”.

In Contrast, David projected that it is very handy and easy to launch and invest in cryptocurrencies. He says, “It should not surprise anyone if traditional startups work; the chances of making it in the cryptocurrency area are statistically one in a hundred. But, on the other hand, one in a thousand ventures will succeed because of how simple it is to go ahead and launch”.

“This is typically viewed negatively when regulators panic because they thought they had tight control over a sector.”

David enlightens us with the predecessors of Web 3. He elaborates, “The success of solutions is addressed through services on the internet. It was handled by multiple service providers, leading to the initial centralization in the 1990s as Web 1. Web 2 offered the potential not just to consume but also to produce web content”.

“For example, Facebook, Twitter, and Instagram are currently concentrating on power and centralizing solutions. As a result, we’re attempting to determine whether a fresh wave of decentralization can arise through several components that we’ve together dubbed and labeled in web 3”.

His insights indicate that many components are still in the development stage, and people with non-technical backgrounds should be patient while technology components evolve and become easier to use. As a result, he believes that Web 3’s economic model will be a significant aspect of its ability to give value to its consumers.

How Will Decentralization Assist Smaller Businesses To Thrive?

David astonishingly says, “One of the most pressing issues is if the last wave of centralization’s thriving decisive business model, which gave way to Google, Facebook, Twitter, and other centralized platforms, was advertising the required profiling and matching of consumers with advertisers.”

He states, “Web3 can only succeed if it can develop a business model that does not depend on the same kind of profiling to feed advertising.”

He shares, “We all use Artificial Intelligence (AI) regularly to connect. Whether it’s the adaptive compression and decompression algorithm that allows us to video conference across continents, or voice recognition and speech recognition, which enables us to dictate a message to another person, but data appears as the next they can scan on the other side, or the online repository of our photos that can be searched not by labels that are painstakingly and manually attached to every picture”.

He says, “The argument should not be about AI’s role; rather, it should be on how come you assumed you could start a project and didn’t consider employing AI?”

“Without the assistance of AI, the Metaverse would simply not exist. But, of course, the way we communicate our view of what the metaverse will be essential in and of itself because a single play will not dominate the metaverse. It will not be a platform that monopolizes participant participation”.

According to him, the blue reality of methods should be represented in a compatible way in the metaverse. And from a technology standpoint, figuring out how this interoperability will function in the real world is a bit noticing.

David elaborates, “Similar to how I prefer discussing artificial intelligence. I’ve attempted to bring up the subject of the metaverse. I’m referring to interconnected solutions that can solve a specific issue. The realm of video games is fertile grounds for Metaverse solutions”.

“We have a whole generation of individuals who have grown up knowing how serious the world of video games is in terms of the depth of connections, interactions, value and commercial potential. This generation will create the metaverse implementations with various purposes, such as figuring out how a group of architects may interact with a customer to speed up the creation of a project while avoiding misunderstandings and blunders”.

According to him, the Metaverse may not be the answer to all of our problems, but it is a novel tool that one may try out on various issues in one’s own life. Moreover, whenever some of these issues are handled by a solution based on a specific implementation, one can feel justifiably proud.

“I’m always looking forward to these platforms to see what will emerge in terms of interactions and how virtual reality and augmented reality may play a part.”

Our interaction with David Orban provided us with a vital understanding of these emerging technologies to obtain a unique perspective. He projected that various technologies, such as the metaverse, virtual reality, augmented reality, blockchain, NFTs, and artificial intelligence, would become interwoven in our everyday lives and that we would find out how to use them to benefit ourselves and each other.

David Orban, Managing Advisor of Beyond Enterprizes, analyzes the global technology environment and applies cycles of increasing technical change to the demands of high-growth businesses. He has a deep grasp of product marketing, sales development, localization, and globalization requirements and mechanisms. Under the needs of a competitive corporate environment, leading teams prosper.