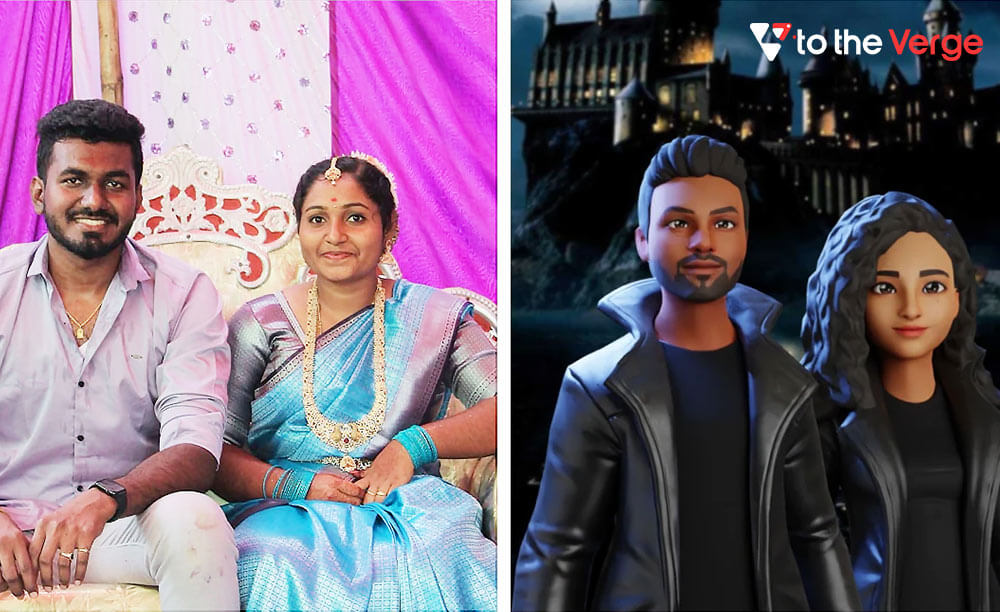 A young couple from Tamil Nadu hosted their Hogwarts-themed Metaverse wedding reception on 6th February in the Great Hall at Hogwarts Castle, which was virtually designed for them. Dinesh SP and Janaganandhini Ramaswamy merged traditions and technology to host their reception digitally, which gained a lot of appreciation from friends and family.

Dinesh, a project associate at IIT Madras, planned this virtual reception in Metaverse due to the COVID-19 pandemic that curbed the number of guests for their wedding and reception. He says, “I was working on crypto and blockchain technology and had been mining Ethereum for the past year. It gave me an idea of having a reception in Metaverse so that everyone could attend it. The future is big in Metaverse. Companies like Microsoft, Facebook, and many more are investing in Metaverse. So I thought by conducting an event, everyone in India will know about the technology.”

Bride Jaganandhini Ramaswamy, a potter head, was equally enthusiastic for her virtual reception. At first, she was doubtful if it would be possible, but then she said it was apt to have a wedding reception on Metaverse since the couple met on Instagram.

Dinesh and Janaganandhini’s avatars were dressed in traditional clothes, and guests were given login details to choose their avatars for the reception. TardiVerse made all the avatars and an avatar of the bride’s late father, who passed away last April. “A 3D virtual avatar of my fiance’s father had been created in NFT so that she can feel the presence of her father in the metaverse virtually and bless our marriage,” said Dinesh.

Social media was flooded with pictures and videos from the metaverse wedding reception. And a musical concert video got viral, which was conducted through metaverse from Chennai.

Giving more details about the event, Dinesh stated that his food partner from Chennai ensured the delivery of the meals to the guest’s house and further thanked the Coinswitch company, which had sponsored the event.

As per the CEO of TardiVerse, Vignesh Selvaraj, this event has been labeled as the first Metaverse wedding reception in Asia and was a big hit amongst people. He says, “It took a 12-member team a month to make this Metaverse reception a virtual reality.” It has been developed based on Polygon Technology Blockchain.

A demonstration was held for them on January 25. They were taught to log in through desktop, laptop, or tablet. The Metaverse is the 3.0 technology that influences people tremendously. We have had a lot of proposals after the metaverse wedding reception went viral. We are planning to conduct an event on upcoming Valentine’s day.