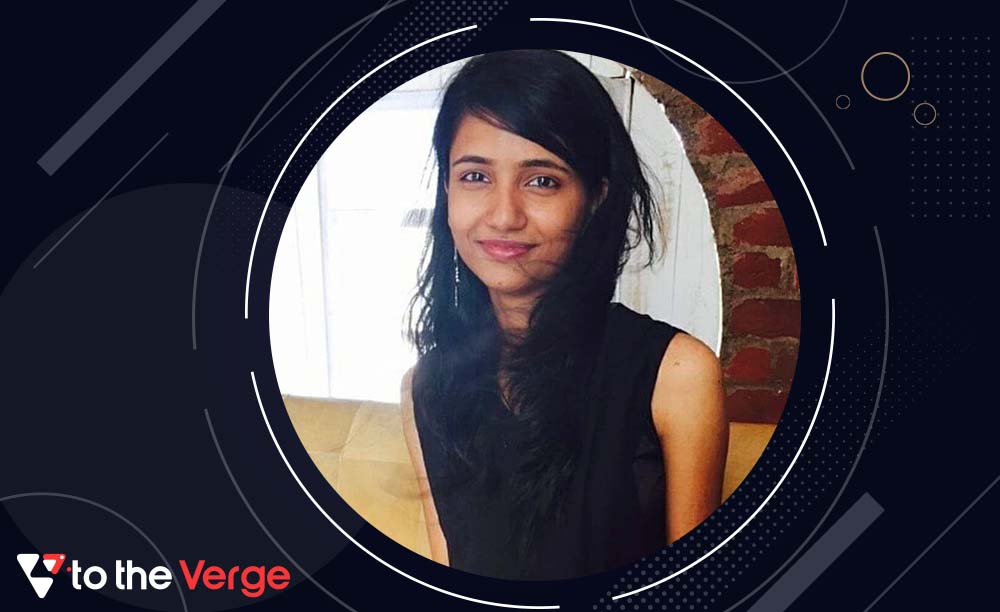 Driving The Space of NFTs: Potentials By Akanksha Badaya

Akanksha Badaya, a Freelance Artist, shares her views on the futuristic possibilities of Web 3.0 and how artists from diverse backgrounds play a significant role in NFT spaces.

“To the Verge” had an insightful conversation with Akanksha Badaya, a Freelance Artist. Apart from Web3 and NFTs, she discussed how women and traditional artists play a crucial role in building NFT spaces. She also enlightened us about metaverse-related community programs. Stay tuned till the end to know all about the conversation!

Table of Contents show
1 About Akanksha’s NFT Exposure
1.1 Akanksha’s Ideas of Investment
2 Role of Women in NFTs
2.1 Akanksha’s Take on How NFTs Benefit Artists
2.2 The Active Role of The Community in Promoting Art
2.3 NFT Giveaways
2.4 How Can Traditional and Folk Artists Be Engaged in the Virtual Platform?
2.5 Web 3.0 as a Viable Platform For Futuristic Possibilities
2.6 Akanksha’s Hold on How India Can be a Potential Leader For Web3 Space
2.7 Her Views on Community Programs With The Contribution of Women in Them
2.8 Significance of Developers vs. Designers
2.9 Mitigation of Rampant Fake Sales in NFT
2.10 The Evolvement of The Metaverse And Her Contribution To It
3 Conclusion

With a passion for art, Akanksha shared how her interest took a different route in the virtual world. She highlighted how she used a variety of social media platforms to assist and navigate her way into an advanced virtual world with NFTs and various other advancements.

She shared, “I have been using Twitter since 2010. I saw many NFT tweets coming on my timeline, so I researched the term. I found out that Twitter has an algorithm; if your tweet has NFTs or startups in it, it will automatically get higher reach and will automatically come on the timeline”.

Akanksha explains that it is very tough to seek a marketplace in the virtual world as the space is already compact. The places you know do not have access to all. Therefore she elaborates on the necessity of knowledge about these marketplaces.

She says, “It was quite challenging as there are so many marketplaces to choose from, and you don’t have access to all of them. So I conducted my research and compiled a list of all accessible markets and the blockchains on which they operate and how I may gain access to them”.

Role of Women in NFTs

Akanksha elucidates how most people didn’t know about Twitter before web 2. Instagram was the only medium where they showcased their art and findings. She explains how people can take advantage of NFTs by connecting them with artists and creators they have never heard of before.

She says, “With NFTs, they can talk to those artists they never even dreamt of. This is a huge advantage; they can have a conversation with them, learn from them, and easily connect with them on Twitter”.

Therefore NFTs are a significant asset for artists because they can showcase their art to a broader and more complex audience, which was previously inaccessible. In addition, people now have access to relevant reviews from well-known artists.

The Active Role of The Community in Promoting Art

She highlights the significance of community. One can’t promote their work without a community; you need people, support, and access because most people have no idea if the art they’re buying or producing is unique. People will not purchase anyone’s art unless and until they feel connected to them.

She adds, “The community gives you access to a large number of viewers, creators, and artists. It helps you grow, pushes you to produce better art, and finds purchasers. Even artists invest in the community when their work is sold”.  She exemplifies the active role of community.

She states that 80% of the market available is digital, and 20% is art. She also introduces us to a famous term/slang WAGMI (We All are Gonna Make It). People tend to motivate each other with this futuristic tagline.

She shared that NFT giveaways are a way to promote yourself on various platforms. But, she adds, “It’s usually done when you have a huge project or a collectible that has a good price flow.”

She adds, “The giveaways are also done on Instagram, like tag three artists, and we’ll choose one and give them a free NFT. These are usually put forward to increase the engagement.”

How Can Traditional and Folk Artists Be Engaged in the Virtual Platform?

She gives an example from Jaipur, Rajasthan, India. Some artists create Sanganeri prints, whereas some create diverse folk paintings, but they are not on the NFT platform because it is exceedingly technical and complex. Secondly, it is not accessible to everyone, and thirdly there is a language problem.

She adds, “To help them comprehend NFT when we are also on a learning stage, where we only don’t completely understand the platform as is a developing market. So engaging unfamiliar people with the place is quite a tough decision”.

“Also, money is required for this site to purchase cryptocurrency, comprehend various stages for interaction, and receive updates. Making traditional artists aware of the occurrences is the only way to bring them to this platform”.

Web 3.0 as a Viable Platform For Futuristic Possibilities

Akanksha enlightens us with the predecessors of web 3.0. She states, “Web 1 was a one-way communication in 90 pixels; we were only writing facts and emails. Web 2 enabled video calling and Whatsapp”.

“Web 3.0, where we want everything to be decentralized, leaves us quite disillusioned because Facebook and Instagram prohibit us when we publish anything on social media. So we seek less centralized things. Web 3 is a perfect platform for this”.

According to her, we have a plethora of talented engineers and developers. However, we encounter difficulty with startups as the ease of doing business in India is somehow really challenging. But, she states, “If the government comes up with proposals to simplify things, such as simplifying tax policies, making things less complicated. I truly feel that we have a lot of potential and talent”.

She states, “These community programs are like a Facebook group, where we get a fixed amount of audience.”

She enriches our knowledge with the aim and objectives of these community groups. The fundamental aim of the community program is to promote the work of various artists and bring their artwork in front of a broader audience.

She adds, “The idea was proposed because when people with fewer followers tweet, they do not acquire a lot of reach; nevertheless, the community gives them an adequate amount of reach in the sense that at least the people in the group may view the postings.”

She shared that it’s very challenging for women to approach and text random individuals as it is occasionally programmed incorrectly. She adds, “As women, we don’t know much, but we’re working hard to learn and establish ourselves.”

Significance of Developers vs. Designers

There have been various conjectures on how developers have a massive amount of demand compared to the designers. Akanksha states that “They are recruiting more developers because large NFT ventures necessitate coders and developers to execute certain tasks. Everyone has a certain job. You can’t know everything and do everything at the same time” .

She adds, “I don’t think this platform does not require designers. The platform needs a set number of special skills for each stage. I’ve already observed various artists who make substantial money through the NFT platform”. We can see an amalgamation of both fields.

She says, “When someone publishes something, a researcher can see if the image is already on Google. Is there something identical on Google? This research can help reduce the danger. But, unfortunately, no one knows who is responsible for this.

Nowadays, people buy NFTs and put them up as their profile pictures. Due to this, various individuals put these NFTs as their profile pictures without any authentication. To mitigate this, she explained, “Twitter came up with a unique feature as part of their verification process where you can link your account wallet to Twitter. So, if it’s your PFP (Profile Picture) NFT, the picture changes from a round to a hexagonal shape. By this, the owner can have a hold over his exclusive ownership. At the same time, the viewers or followers can comprehend whether the NFT in the display picture is authentic or not.”

The Evolvement of The Metaverse And Her Contribution To It

She says, “As an artist, the whole purpose for me in this space is that most people think that it is a cash driving opportunity. Even people who are not artists are coming here and making random art and selling it and making a good amount of money. Similarly, people are coming to earn, not to stay”.

But on the contrary, she states, “I’m here to stay. Because I was making art before NFTs, and I’ll be making it after NFTs. For me, it’s more about art and less about NFTs”.

“NFT is a comprehensive platform to get to know people, connect with them, and collaborate. Make my art get a higher reach. It is a platform where we can meet new people and get to know their stories from different backgrounds. It will evolve because people trust crypto as it is transparent with vast future possibilities”.

She adds, “It’s all about staying. The longer you stay here, the more you learn, the more people will see you, the more they will find you genuine”.

The key insights of our conversation with Akanksha Badaya changed our perspective about how we can be sanguine that the future is Web 3. She is very optimistic about the future possibilities of Web 3. She also enlightened us with various community programs on different social media platforms. Her emphasis on the potential of NFTs to boost traditional, folk and local art is not only thoughtful but highly valuable.

Akanksha Badaya, a freelance artist, comes from an art background. She did her bachelors in Fine Arts and Painting. She has been involved in the art field since she was a kid. She finds social media the most relevant platform to showcase and publish her work.

She is most active on Twitter as she conceived that Twitter is a platform with maximum reach and engagement compared to the other platforms.

Much detailed interview. Quite informative. Need more like this.
Kudos to the interviewer.